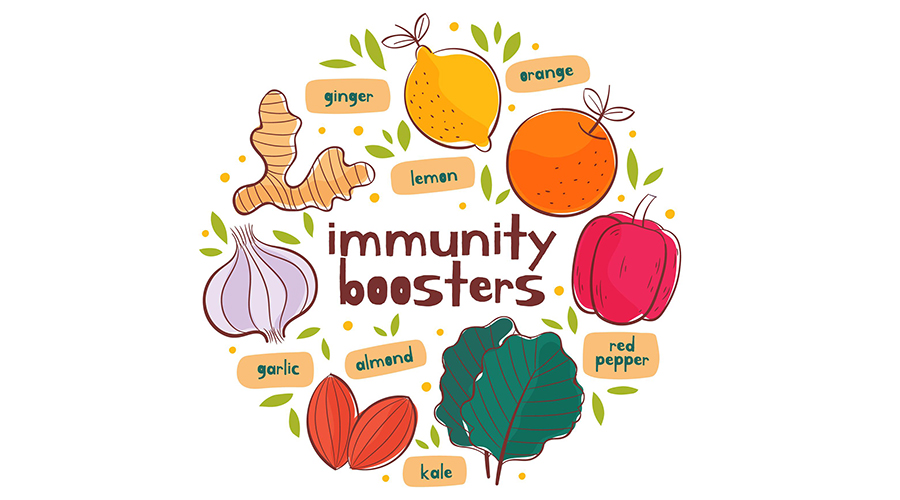 Your immune system is responsible for defending your body against harmful bacteria and viruses that can cause diseases or infections.

Your diet has a big impact on how well your immune system works. Although no single food or vitamin supplement can completely protect you from illness, eating foods high in nutrients can help your body’s natural defences.

You’re going to need a strong immune system if you want to avoid getting the stomach flu that’s going around the office or a miserable cold.

Ideally, your immune system will intervene and defend your body from disease-causing pathogens when you are attacked by viruses or bacteria from the environment. But sometimes it fails, and an organism or substance makes you sick. You need to be ready and consume foods that can boost your immunity so you can fight dangerous bacteria.

One of the best immune-boosting foods is blueberries. Blueberries contain a type of flavonoid called anthocyanin, which has antioxidant properties that can help boost a person’s immune system. Anthocyanin and the flavonoid found in blueberries are, according to a study, crucial components of the respiratory tract’s immune defence system.

Researchers also found that people who ate foods rich in flavonoids were less likely to get upper respiratory tract infections or common colds than those who did not.

One of the best foods for the immune system is oats and barley. Oat and barley grains contain beta-glucan, a type of fiber with stronger antimicrobial and antioxidant properties than echinacea.

The U.S. Department of Health and Human Services claims that echinacea plant consumption lowers the likelihood of catching a cold. Consuming oats and barley boosts immunity, hastens wound healing, and may improve the effectiveness of antibiotics in humans.

Dark chocolate is one of the best foods for boosting your immune system, so if you don’t already, give it a try. Theobromine, an antioxidant found in dark chocolate, supports the immune system by shielding the body’s cells from free radical damage. The body creates free radicals when it breaks down food or comes into contact with pollutants. Free radicals can damage the body’s cells and may contribute to disease.

Dark chocolates should be consumed wisely as even though it is one of the immune boosting foods, it is high in calories and saturated fat which may cause you to gain weight.

The body does not produce or store vitamin C, and we need vitamin C to live a healthy life. The recommended daily amount for most adults is 90 mg for men and 75 mg for women.

Red bell peppers contain beta-carotene, a potent antioxidant with anti-inflammatory and immune-stimulating properties, and have 2- 3 times more vitamin C per ounce than oranges. Instead of steaming or boiling red bell peppers, try roasting or stir-frying them to preserve their nutritional value.

Blue mushrooms are one of the best immune-boosting foods. Niacin, riboflavin, and vitamin B are all present in blue mushrooms, which are also an excellent source of selenium. Selenium deficiency is associated with a higher risk of contracting the flu.

Beta-carotene, which is abundant in sweet potatoes and is transformed by the body into vitamin A, can support a healthy immune system. Sweet potatoes are highly flexible food items and can be easily incorporated into your diet.

The amino acids L-theanine and L-theanine, which may aid in the production of germ-fighting compounds in your T cells, are also abundant in green tea.

8 superfoods have been covered in this article which are some of the best immune-boosting foods. These foods may improve a person’s capacity to fight infections by boosting their immune systems.

Given that the immune system is intricate, eating a balanced, healthy diet is just one way to support immune health. The best way to strengthen your immune system may not just involve eating healthy foods; it may also involve getting enough sleep and exercising.

Consult a doctor if you frequently get the flu or another illness and are worried about your immune system.