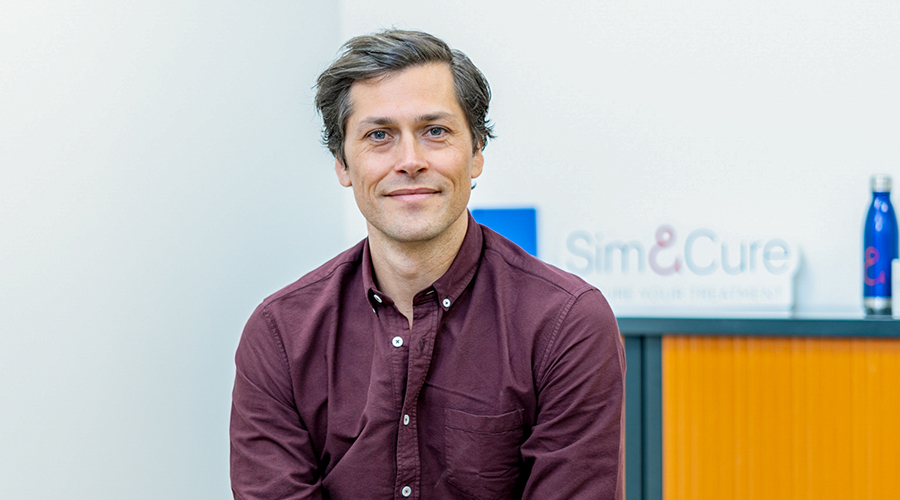 We all know there cannot be a greater love for humanity other than serving mankind, more specifically serving the poor and the ailing. One who is committed to the life of giving back to society without caring for rewards and recognition should be counted as the benevolent master who upholds the values of charity, kindness, and compassion to the millions. Mathieu Sanchez, the CEO, and co-founder of Sim & Cure is one such dignified name in the entire fraternity of the healthcare industry.

Right after he acquired his Ph.D. degree, the idea to become an entrepreneur hit upon his mind. To transform his dream into reality, Mathieu even dared to relinquish a secure job as an R&D Engineer at Philips. Unlike any ordinary businessman, who would be motivated to the business generating huge returns within a short span, Mathieu chose a difficult path. He conceived an ingenious idea where he introduced Digital Twin and Artificial Intelligence Technology in Endovascular treatment. This software not only enables a hassle-free, seamless operation but also guarantees relief to the patients by mitigating their pain and trauma generally associated with complex endovascular surgery.

Transcending the barriers and reaching the pinnacle

Apathy to adopt changes and inertia leading to stagnancy could be some of the major setbacks for a person who ventures out to stir up a storm in a seemingly peaceful business world. Such was the scenario for Mr. Mathieu when he initiated his startup Sim & Cure. People were against the idea of running a complicated project like the one devised by Mr. Mathieu. Also, he felt a dearth of resources and funds necessary to carry on with his business ideas. This made him approach another compassionate man and the present co-founder of Sim & Cure, Prof Vincent Costalat, who eventually helped him to crystallize his ideas into a real business solution.

Business is not everyone’s cup of tea, being a researcher makes it even more challenging. But for a dreamer and achiever like Mathieu Sanchez, nothing is impossible. Hard work is not an act that we engage in achieving our life’s goals; rather it’s a way of life that we cultivate. With these ideals, the great leader plunged into action and with all his earnestness equipped himself with every kind of knowledge and expertise in the fields of Finance, Law, Sales and Marketing, and also administration, which helped him to take his business forward with much conviction and valor.

The ethos that drives one to action

Devotion to the noble cause, zeal to seek the unattainable, and an indomitable instinct to fabricate cutting-edge solutions are the bedrocks on which an organization thrives. Under the proficient guidance of an astute leader like Mathieu Sanchez, the employees at Sim & Cure are inspired to work together in attaining a common goal of contributing their best to society. “I think we help employees to work in a competitive and kind environment with a real sense to their work”, affirms the entrepreneur.

Empowering the team with a strong leadership

Fostering the cult of positivity, digging out possibilities, and creating a cosmos out of chaos within a business setup are the virtues that define a true leader. Mathieu Sanchez is such an entrepreneur par excellence who always stands by his employees in a real crisis, encourages them to put in their best, feed them with clear ideas and knowledge, and ensures that his ideas and objectives could perfectly blend in with the workers’ vision at Sim & Cure. In his words, “I’m also in charge to define the vision and the guarantor of the culture of the startup”. A leader not only instructs but also inspires. With this ideology in perception, Mathieu adds, “A good leader not only needs to set ambitious objectives, but also he needs to be a facilitator when things become harder”.

Mission and vision of Sim & Cure

Mathieu Sanchez, along with his team at Sim & Cure is driven toward securing endovascular treatment with the help of a personalized therapeutic strategy that could reduce the chances of failure during the operation. For this, a dedicated software has been developed combining Digital twin and Artificial Intelligence. But the real fallout of this software could be its short time of computations. To overcome this challenge at Sim & Cure, Mathieu builds everything internally, from solvers to algorithms, by utilizing their own intellectual property.

This all-new strategy has been able to transfigure, and transform neurovascular surgery into a less complicated process. It reduces the use of surgical tools, duration of operation, and the time of X-Ray exposure. All these have enabled Sim & Cure to integrate fully into the clinical workflow and curtailed the cost of endovascular surgery, which have benefitted both the patient and the healthcare system.

Enlightened with the vision of gifting the planet with a life-transforming healing system, Mathieu Sanchez works effortlessly into making himself better every day. In his journey of successful entrepreneurship, the leader confides in his penchant for learning. Only by upgrading oneself through learning and cultivating a competitive spirit one can concretize his vision into reality. With this assertion and belief, the entrepreneur announces his plan for tomorrow, “To be honest, I’m very excited by the scale-up we will have in the next 2 years to help Sim & Cure to become a standard of care”.