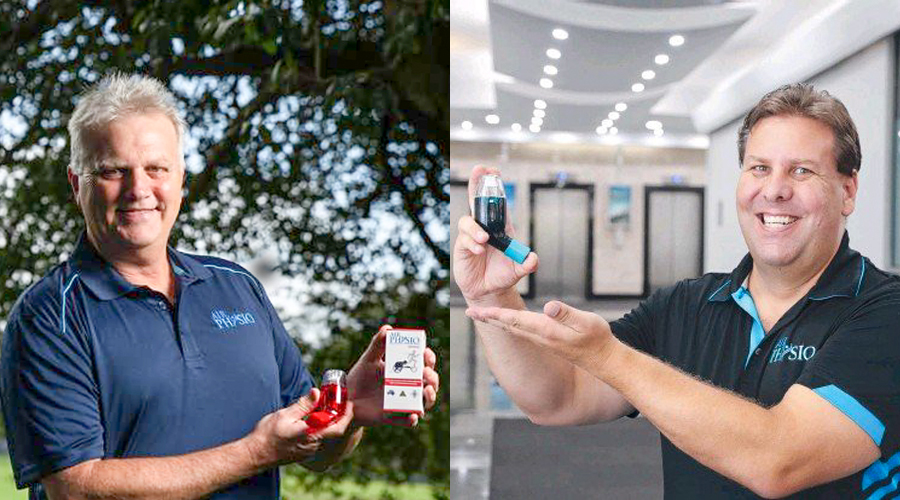 They say great minds think alike. And when they do, creative ideas emerge. But, when they come together, they design a powerful future with a unified vision formaking a great difference in the lives of others and thus contributing to the overall growth of society. The inspiring journey of the avid entrepreneurs, Steve Owen and Paul O’Brien, who are setting a benchmark of excellence in the medical device industry as cofounders of AirPhysio Pty Ltd, is a perfect illustration of that.

Paul had a background in sales, marketing, and business management while Steve worked as a business consultant for the Australian Government for 20 years. The duo met via business networking, and it’s their complementary skill sets and the common vision of helping to change lives around the world that further led them to work together as business partners.

The Foundation of AirPhysio

It all started when Steve and Paul came across a respiratory physiotherapy device that was looking for marketing assistance. Initially, the goal was to sell this device but difficulties in distribution and manufacturing propelled the group to create an Australian-made device using higher quality materials with greater control of supply, manufacture, and marketing. Thus, AirPhysio, an innovative oscillating positive expiratory (OPEP) mucus clearance and lung expansion medical device came into existence and AirPhysio Pty Ltd was formed in 2015 with a vision to help people with respiratory conditions like Asthma, Bronchiectasis, COPD, and Cystic Fibrosis. After initially being a home business, Paul and Steve were able to open their first office and warehouse in 2019 and since then, the business has grown significantly.

Paul, as an experienced business manager and as current CEO, with the assistance of upper management staff, is responsible for the day-to-day operations of AirPhysio. Meanwhile, Steve as a director, oversees the company’s regular strategy meetings for the business but on a day-to-day level looks after the Maitland office with a small team relevant to his own skillsets in customer service, sales, and human resources. The main office of AirPhysio is based in Tweed Heads South near the NSW/Queensland border which is closer to all its suppliers and allows it to hire local people of all ages. Thus, Steve had to fly up regularly to the main office. But the duo felt that it’s not the best strategy for Steve to be involved in day-to-day operations at the head office due to the distance. Thus, they came up with a happy compromise, bringing in some external expertise. With such mutual trust, respect, and understanding, the dynamic duo is leading the company towards growth and success.

“Although we live over 600kms apart we talk almost daily and make all decisions consulting with each other. We both trust each other and pick up on errors and if we disagree, we discuss frankly to ensure we don’t allow issues to dwell. We both subscribe to the same ethical values of helping to change lives around the world. Once we agreed on that all other strategies and visions became aligned,” asserts Paul.

Creating a Recipe of Success with Five Key Ingredients

Besides the insightful leadership of Paul and Steve, the success of AirPhysio also comes from its unrelenting focus on 5 key aspects: community values, high quality, ongoing research, customer service, and relevance to the health industry. The company puts a stronger emphasis on community values and thus it has high-profile sponsorships with Gold Coast Titans NRL Rugby League, Newcastle Jets A-League Soccer, and many in the health industry such as with the Lung Foundation, and makes many other smaller donations to local charities and community groups. It sources the highest quality materials to create optimal devices with greater durability for the customer and with its sales booming into the tens of thousands, it has also ramped up its ongoing customer service while employing new systems for sales, marketing, and after-sales service. “We are always researching Oscillating Positive Expiratory Pressure technology and through this have been able to come up with products to suit different demographics and lung capacities. So, we now have devices for children and sportspeople as well as our average and low lung devices,” affirms Steve.

Finally, for its relevance to the health industry, AirPhysio continues to engage with local organizations to develop medical trials and partnerships and do presentations and events. Recently, the company has also gained government approval to be a Registered Provider for the NDIS (National Disability Insurance Scheme). This enables people with disabilities to purchase a device using their government-funded plan.

Overcoming Challenges and Learning along the Way

Every venture goes through an acid test and AirPhysio wasn’t any different. Initially, it had to get through several stumbling blocks to reach where it is today. AirPhysio needed several medical validations before it could launch in many countries. Registration via FDA (USA), CE (Europe), and TGA (Australia) require detailed submissions which take some time to write up. Some medical validation in terms of testing was also required and again having some trials done and getting reports finalized took several months. In fact, the time between business inception and making some reasonable sales was over 2 years. Not only was time a factor but finance for startups relied almost entirely on the equity put into the business by the Shareholders. “This was the only source of revenue in the first couple of years to finance research and development until the first approvals came in, the device design was finalized and sales at a small level could commence. The experience taught us the value of planning long term, being patient, and that you need to have your compliance in place,” opines Paul.

Drawing key learning from their challenging journey, the entrepreneur duo advises the budding entrepreneurs to know their product and customers and plan, research, and improve what they have. They also urge aspiring entrepreneurs to have the self-belief to achieve their vision and goals and surround themselves with good people and advisors. “Have a passion for your business and understand that it is the passion that gets you success and gets you through the difficult times. Don’t just focus on the dollars. Have patience and spend time away from the business when needed,” adds Steve.

Set To Expand Its Global Footprint

Moving ahead, Steve and Paul aspire to further expand AirPhysio’s presence to other countries. AirPhysio’s demand in places such as the USA is great but, it also comes with shipping and customs problems. Shipping large amounts of product to the distributors in other countries is problematic, expensive, and time-consuming. Thus, AirPhysio hopes to build small production hubs in the US and the UK in the next couple of years to be able to supply devices to North America, UK, and Europe much faster than it does now.

“This will give us a worldwide footprint and will make us a truly multi-national company with the potential for unlimited growth in an expanding market. This also gives us the right to use labels such as ‘Made in the USA’ which will increase consumer confidence in those territories overseas,” concludes Paul.