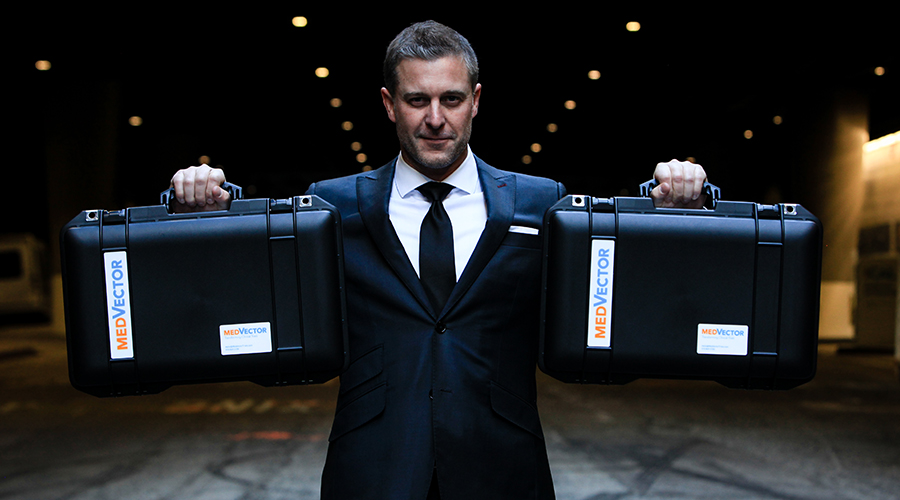 Scott Stout is driven by the desire to compete ─ either racing downhill mountain bikes, riding motorcycles, or growing a business. If there’s someone quicker, smarter or more experienced, so much the better for the agile and entrepreneurial Stout, who loves to compete and win, but doesn’t always have to be “the best.” In fact, he says, “When I’m the best, I just feel like the competition isn’t strong enough.  When I’m in the pack, I push harder.”

This drives him off the beaten path to take risks, ask tough questions, and forge new connections.“As an entrepreneur, I enjoy accomplishing the seemingly impossible, especially when it’s outside my comfort zone. It fuels me,” says Scott.

Resourceful early on, Scott claims he was an “OK student,” yet competed with academic highfliers to earn a spot in his high school’s honors classes, his college’s business school, and several prestigious internships at marquee companies. Armed with a sterling resume, helanded in Los Angeles… and became a nightclub bartender, because “life is weird,” says Scott.

“I wouldn’t trade that experience for anything. It was physically taxing, but anexcellent business experience. Reading people, providingcustomer service, and genuinely listening ─ combined with the stresses of thinking fast on my feet and jumping in to negotiate conflicts ─ all taught me how to work quickly and profitably, both for myself and the bar owner.”

Fast forward 10 years, now a professional investor and options strategist at Morgan Stanley, Scott morphed into “the epitome of a finance guy,” working as part of an ultra-high net-worth team.  Part of his job was looking for future clients, which led Scott to working with startups tohone their investor models, valuations, and go-to-market strategies.His ability to connect people and ideas,combined with his investment acumen,fueled his entrepreneurial spirit and set the stage to act on future opportunities.

Go Find Me That!

And then it happened. Scott was exploring opportunities to create more revenue streams for a private equity client that acquired and turned around hospitals. At this meeting,the topic of clinical trials arose. “Why aren’t you pursuing clinical trials?” he asked.His question was met with a slew of reasons─from not having the pharma relationships to not knowing where to start.

Thinking quickly on his feet, Scott suggested: “What if we found a turnkey clinical trial company thatplaced their people in your hospitalswith some sort of profit-sharing?  And then, when the study is over, they pack-up and leave?” The founder of the private equity company looked him squarely in the eye and said, “Go find me THAT.”

His team’s rigorous due diligence revealed “that” didn’t exist. They then pushed the idea further and questioned utilizing telemedicine, instead of putting actual “boots on the ground.” That way, providers could offer their patients as subjects without the risk of losing them to another doctor, and approved clinical trial sites could increase their volumes by having access to more qualified subjects.

Early on, the MedVector team realized how important it would be to keep their solution simple, and to make sure it was compatible with current study protocols. “At first glance, what we’re offering may seem disruptive, which can be intimidating for clinicians inundated in the current model. But when you start to break down the protocols ofstudies, clinicians realize we’re not changing the current model,” says Scott. “In reality, we are providing a much-needed enhancement to the existing model, which has the potential to eliminate recruitment delays and get medications into the hands of people who need it more quickly.”

“Our technology is simple by design, and simplicity is the ultimate complication,” says Scott. MedVector’s proprietary solution makes it easy for non-participating physicians, specialists,surgeons, and even locations that haven’t been approved as clinical trial sites, to provide access to their patients andfacilitate clinical trial monitoring, without the fear of losing their patients.  Because patients stay within their local networks, private practices and local hospitals generate revenue from the medical testing associated with the clinical trial.  “It’s a win-win for everyone involved,” says Scott.

Prior to the subject’s appointment, MedVector ships a trial-programmed device to the subject’s local doctor. The embedded telemedicine software, called Prime-Control Technology,enables the approvedclinical trial site tomonitor the subject live,face to face, as if they were in the same room.

By creating access to more patients,MedVector has the potential to eliminatecurrent socioeconomic and diversity concerns, as well as delays in subject enrollment.  They do this by partnering with CROs, pharma sponsors, and patient recruitment companies to connect ALL identifiedsubjectsto existing clinical trial sites, not just the ones lucky enough to be geographically accessible, or lucky enough to have a participating physician.With MedVector, sponsors now gain access to millions of subjects worldwide,without triggering new sites.

In the wake of COVID-19, the entire world turned its attention to the complicationsof developing, testing, and delivering effective vaccines and therapeutics. Nowwe see how quickly medications can be approved when pharma companies have access to qualified patients to fulfill the requirements of the FDA. MedVector is creating the bridge between pharma and subject enrollment to greatly expedite speed to market.

“I think of MedVector’s platform as the Uber of clinical trials,” says Scott. “We’re not buying carsor hiring drivers. We’re simply connecting someone who is looking for a way to get to their destination, to someone who can provide it.”

Scott is no stranger to the clinical trial process.  In his early 30s,he lost the ability to walk.His mother wheelchaired him from neurologists, to orthopedists, to physical therapists, who ordered multiple MRIs and other tests. None could correctly diagnosethe cause of his immobility.

Finally, while in the hospital, a world-renowned clinical research rheumatologist, Dr. Orrin Troum, happened to be in the right place at the right time and determined Scott had a type of juvenile arthritis that was causing severe swelling in his hip joints. Just four hours after taking a new medication, Scott was walking again. He later participated in a clinical trial run by the same doctor.Today, the 42-year-old entrepreneur is off all medications and living a healthy life; back toskiing, riding motorcycles, playing golf, and most importantly, wrestling with his three boys.

“This life-defining experience has been an ongoing driver for me. Not everyone is lucky enough to have a world-renowned doctor so close in proximity. I like knowing that MedVector gives people access to advanced medicine and physicians like Dr. Troum, regardless of where they live or their financial status.  And I think Dr. Troum likes it, too.  After all, he’s one of our investors,” says Scott.

Scott believes the greatest asset a startup CEO can have is the ability to avoid the common traps that can kill a new business. The biggestis what Scott calls, “getting lost in feature-land.”  Feature-land isa place where mature businessesbrainstorm product features, use cases, partnerships, and new revenue streams.

“These are very important conversations to have in mature companies, but they kill startups,” says Scott. “For example, if you’re building an app for instantly appraising baseball cards using a smartphone camera, it’s important to stay focused on the core concept. Future features might include trading, selling, or a social media component.  These are all good ideas, but until you master the core concept, it is a waste of time and capital.”

Timing and market awareness are also crucial.  “While the clinical trial industry has been hesitant to modify existing policies and procedures, Covid-19 provided the required push needed to make changes,” says Scott. “When these kinds of opportunities present themselves, entrepreneurs must be ready to strike. It’s part luck, and part preparation. MedVector had the team and the product ready. I’m immensely thankfulfor that, and I look forward to a rewarding future for everyone involved.”